A BMW mechanic in Melbourne explains the history of BMW

Luxury brands don’t just pop into existence overnight – it can take years for a car manufacturer to cultivate the image of that brands like BMW have been able to foster.

While today we know BMW as one of the most recognisable car brands in the world, it wasn’t always this way. In fact, there were several points in the company’s history where it looked like they might not survive at all!

Have you taken your BMW in for a service? Need to kill time while you wait for your specialist to look at your car? Join our BMW mechanics as we take a step through time and look at the history of BMW!

Bear with us: this summary is going to be filled with gratuitous German!

It might also get a tad complicated – rather than starting as a single company, BMW actually began its life as two, each working in a different area of manufacturing.

First opening its doors in 1911, Gustav Otto Flugmaschinenfabrik (talk about a mouthful) was one of Germany’s pioneering aircraft designers and manufacturers.

While GOF was known for producing successful machines, it struggled with its processes – operations simply weren’t cost-effective, and the company often struggled to generate enough profit to stay afloat.

This wasn’t helped by the outbreak of WW1, which put even more pressure on the company!

By war’s end in 1918, the German economy was in tatters. In order to survive, the newly-christened BMW was merged with GOF, which had also since rebranded (BFW – Bayerische Flugzeugwerke) – as you can tell however, the BMW name stuck!

Germany’s defeat saw harsh conditions placed on it by the victors – in particular, its arms manufacturing was almost completely shuttered.

And since both GOF/BFW and BMW produced components for warplanes, they had to find something else to manufacture – and fast!

In the end, they reworked their factories to produce less militaristic products such as farm equipment, truck engines and railway equipment.

Despite economic hardship, BMW did well for itself – in particular, its R32 motorbike put the company on the map, and BMW experienced explosive growth.

With a successful line of motorbikes under its belt, cars were the next logical step.

And that’s exactly what happened in 1928, when BMW purchased Fahrzeugfabrik Eisenach, a car manufacturer. Using their newly-acquired car production line, BMW made its first car, the BMW Dixi.

BMW during the Second World War

Like many German companies, BMW was once again absorbed into the German war machine. For the second time in its existence, BMW would primarily make weaponry – in particular, motorbikes and engines for warplanes (funny how history repeats itself like that).

To keep up with the demands of the German military, BMW employed huge numbers of prisoners of war, forced labourers and even prisoners from concentration camps. Like many things occurring in Germany at the time, conditions could only be described as horrid.

While BMW has owned up to these practices and apologised for its role in atrocities, this chapter remains a dark period in the company’s history.

Owing to its role in the recently-ended conflict, BMW’s heavy machinery – or what remained of them – were dismantled, and the company barred from producing cars. One of its factories was actually seized altogether (which led to there temporarily being two competing BMWs!)

Once again, the company was forced to manufacture whatever it could to stay afloat, including pots, pans and cutlery.

Thankfully for us, this period didn’t last very long – by 1948, BMW was back in the game, having reestablished its independence. The R24 motorbike hit the market in 1948, with the BMW 501 saloon following in 1952.

And the rest is history!

Thankfully, BMW’s recent history has been decidedly less dark. During the 1960s and 70s, BMW started expanding beyond Europe.

And with that came a whole host of new cars, many of which we now regard as all-time classics such as the BMW M1, the 507 and the 700, just to name a few!

In 1990, BMW started a new chapter in its history by opening a Research and Innovation Centre in Munich that would house an army of engineers, designers, scientists and more.

BMW has been at the forefront of automotive technology ever since – its brand-new i3 electric hatchback, for example, can automatically park parallel park for you.

It’s thanks to this initiative that BMW was able to take the lead as one of the most innovative car brands on the market. Combine that with its pre-existing reputation for quality engineering, performance and stylish design, and it’s not hard to see where its exclusive status comes from!

Of course, such a high-tech, exclusive car requires service to match… and you won’t get any better than a specialist BMW mechanic! 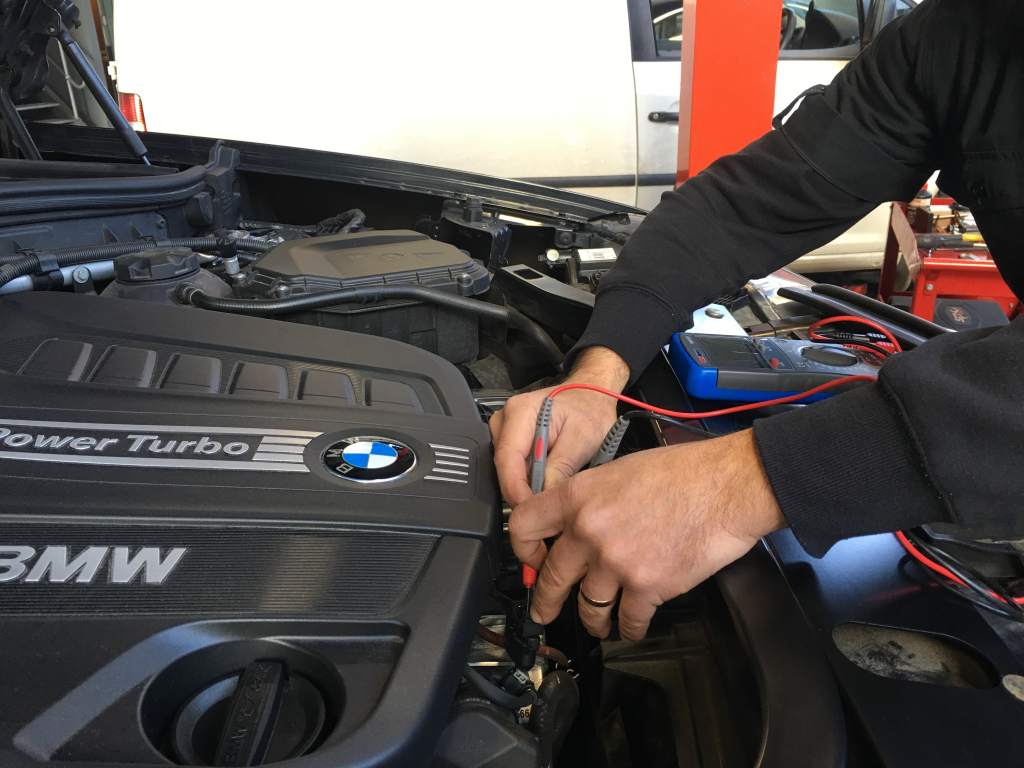 Need a BMW mechanic in Melbourne?

Unlike the corner mechanic, we work solely with luxury German brands. Our BMW mechanics are genuine specialists – we know what makes your BMW tick.

And unlike the local car dealer, we operate without the overhead costs that come with running a dealership. When it comes to value for money, we’re the best BMW mechanics around!

Wherever possible we make use of OEM parts and components. These are equal to genuine BMW parts and in some cases, even come off the same production lines.

The only difference? The cost – OEM parts are significantly cheaper!

This allows our BMW mechanics in Melbourne to provide your BMW with specialist service without breaking the bank.